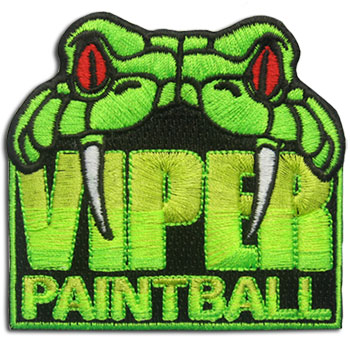 Since it's creation in the 1920s, the game of Paintball has evolved drastically. Some of this evolution is due to the many passionate fans around the world who want to play this exciting game as their part time hobby. Credit is also due to the multi-million dollar industry of great manufacturers and distributors who have made it possible to market paintball products and accessories alike.

Those who enjoy Paintball know that it is a very fast paced, although sometimes painful game. One of the biggest challenges faced during a match is recognizing who is on your team and who isn't. Many teams strive to have some way to differentiate themselves from the others, such as wearing a certain color helmet or clothing. As you can imagine, by the time the third or fourth round is started, the helmets are so covered in paint, the players can barely recognize what color they were originally wearing.

Some great accessories are found right here at Stadri, mainly our custom made paintball patches. These detail-oriented patches are of great help to seasoned Paintball players who are looking to brand their teams and/or have their teams' logos on their equipment and clothing for recognition purposes. This is especially important in tournaments, as each team has its own patch on its uniforms or equipment.

In the past, many Paintball teams have tried using different reflective colors on their helmets to recognize one another, which works only some of the time. This is because other teams will start to duplicate one another, and it can become almost impossible to differentiate between one's teammates and 'enemies.' The best solution is that of custom paintball patches. By creating a unique logo, no one is able to duplicate it. The custom patches would have to be large enough and in several locations, in order for teammates to recognize one another from a distance. When the course has multiple levels, individuals need the ability to recognize their teammates from 360 degrees.

At the same time, the Paintball patch design and color must blend in with the uniform, so the members of the team won't stick out to their 'enemy.' Many Paintball teams also cover their patches with a clear coating, so that if someone were to shoot it, the paint could be wiped off for the next round. Even if they can't get all of the paint off, having multiple patches all over will aid in recognition, ensuring teammates are not inadvertently hit.

Viper Paintball always gets this right. Check out some of their patches from years passed.

A lot of people start playing paintball because they get excited about the idea and want to give it a go. Those who stick to the game for the long run reap the rewards of being part of a team that will gain recognition as it moves up in rank and popularity in the paintball world. Even more important is showcasing good sportsmanship and taking pride in being part of a team that has a name and stands together to become number one, and to really show the world the uniqueness of your team and how good you are at this wonderful sport. This is one of many reasons to have Stadri patches on your Paintball uniforms or equipment.

We encourage new and seasoned Paintball players to be active in the sport! For those of you who are interested in getting involved in the sport but don't have the budget to purchase expensive gear right off the bat, we have a solution. First of all, we provide only the lowest-priced Paintball patches anywhere. And for your gear and accessories, there's paintballgunsforsalenow.com. Between us and them, you will save hundreds!